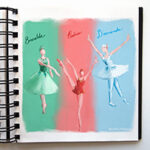 A sketch inspired by a recent performance of George Balanchine’s Jewels at New York City Ballet. One of my favorite ballets, it features three jewel-themed dances – Emeralds, Rubies and Diamonds – with music by Fauré, Stravinsky and Tchaikovsky and glittering, jewel-bedecked costumes by Karinksa. The emeralds section is dreamy and poetic; rubies is jazzy; […] 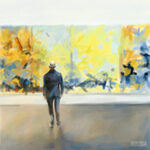 An iPad sketch of a man gazing at the dreamy Joan Mitchell abstract landscape painting, Minnesota (1980), at the exhibit,  “Joan Mitchell: I carry my landscapes around with me,” at David Zwirner gallery. Part of my on going series on looking at art. “I paint from remembered landscapes that I carry with me – and […] 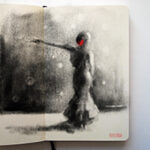 Flamenco Dancer Sketch Flamenco dancer, Soledad Barrio, sketched from memory after watching her perform with Noche Flamenca, in New York’s East Village. This quick sketch captures Barrio’s exquisite final moment of stillness at the end of her final piece of the evening. You Might Also Like 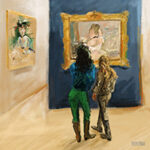 I’ve always been a fan of Berthe Morisot, one of the founding members of the Impressionists and an all-around inspiring woman. When I heard there would be an exhibit of her work at the Barnes Foundation in Philadelphia, I immediately made plans to go. Morisot’s painting style always seems looser and fresher to me than […] 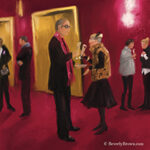 From my iPad sketchbook:  holidays in NYC, as enjoyed by New Yorkers. Bergdorf Goodman’s holiday windows are intricate works of art that take a full year to create. The theme of this season’s windows was New York cultural institutions. This glamorous window was inspired by the Museum of the Moving Image. This winter season was […] 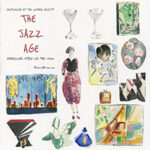 From my sketchbook, at the delightful “Jazz Age” exhibit at the Cooper Hewitt Museum in New York City. A perfect summer cocktail of 1920s American art-deco style in art, fashion, decorative arts and jazz music. The show runs through August 20, 2017. 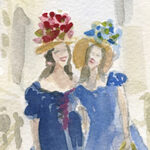 Chic New Yorkers strike a pose in their Sunday best at New York’s Easter Parade and Bonnet Festival. This annual event dates from the 1870s, and was later immortalized by Irving Berlin, Judy Garland and Fred Astaire in the movie, Easter Parade. I’m always impressed by the participants’ creativity and enthusiasm. Clearly these people have spent days crafting their looks. It’s also a […] 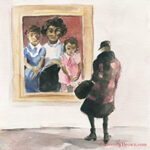 From my series on looking at art…. perusing the wonderful “Alice Neel,Uptown” exhibit at David Zwirner Gallery, currently on view through April 22nd. This show focuses in on Neel’s intense emotional portraits, primarily of friends and neighbors, during the years she lived in East Harlem and the far Upper West Side. A nonconformist, who refused to follow […] 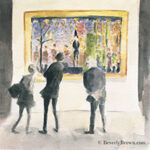 Observing the observers at the “Seurat Circus Sideshow” exhibit at the Metropolitan Museum of Art. This captivating show of sideshow-inspired artwork by Georges Seurat and other master artists, including Daumier and Picasso, runs through May 29, 2017. This watercolor sketch is part of my ongoing series on looking at art. It’s available as a print in my online shop, in […] 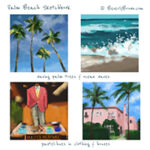 A recent trip to Palm Beach felt like a Technicolor world compared to gray wintry New York City. These were sketched on my iPad with the Procreate App. 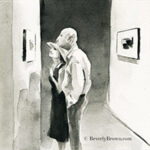 Looking at Diane Arbus New Yorkers captivated by the early photographs of Diane Arbus. The exhibit, “Diane Arbus: in the Beginning,” is on view at the Met Breuer through November 27, 2016. From my ongoing series of people looking at art. 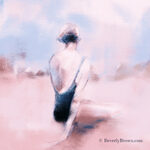 That End of Summer Wistful Feeling…. I know summer isn’t officially over, but Labor Day Weekend always feels like the end of summer. This contemplative beach scene was painted digitally on my iPad, using the Procreate App. 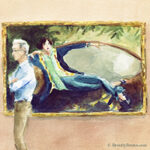 Gertrude Vanderbilt Whitney Surveys the Scene 100 Years Later From my sketchbook at the Whitney Museum. The museum’s founder, Gertrude Vanderbilt Whitney, as painted by Robert Henri in 1916, “observing” the visitors. This commissioned painting did not please her husband, Henry Payne Whitney, who refused to hang it in their home because she was, scandalously for the […] 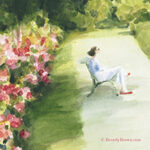 Paris never disappoints, even when she is hobbled by strikes and floods (as happened during my visit last month). Here are a few Paris watercolor sketches from my recent trip. All of these Paris watercolor paintings are available as prints in my online shop – on canvas, paper, metal or acrylic with multiple framing options. Shop all Paris artwork, or […] 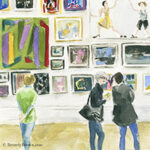 Last month I spent several days in London, where I had the good fortune to attend the Royal Academy Summer Exhibit. What makes this show unique is it is so eclectic, with world famous and unknown artists shown side by side (& above and below). The exhibit is open to anyone who applies.  If you saw Mike Leigh’s 2014 film, Mr. Turner, you’ll recall the showdown scene […] 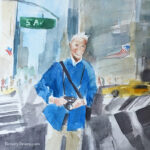 New York lost some of its sparkle on June 25th with the passing of legendary photographer, Bill Cunningham. Long before street fashion blogs became popular, Bill was riding his bicycle around town, snapping pictures of fashionable New Yorkers from all walks of life. His weekly On the Street column for the New York Times delightfully chronicled New York style […] 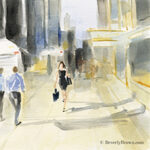 New Yorkers are always out and about. At once anonymous and on display. Walking, eating, socializing, working, dreaming. This perpetual parade of humanity is a constant fascination and the subject of a few new watercolor paintings. All are for sale in my shop as giclée prints on canvas, paper, metal or acrylic with custom framing options. Click on […] 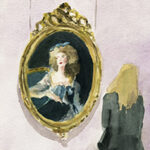 A watercolor sketch from my looking at art series at the exquisite exhibit, Vigée Le Brun: Woman Artist in Revolutionary France, at the Metropolitan Museum of Art. This show inspired me in so many ways. Elisabeth Louise Vigée Le Brun was painting at a time when women weren’t allowed to attend art school, but that didn’t […] 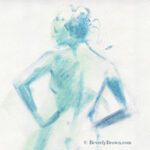 Whenever I can, I attend live figure drawing sessions here in NYC. There’s really no better way to hone your art skills than to draw the figure from life. It’s one of those skills I’ll never fully master, but that’s what makes it interesting – and sometimes frustrating! These recent live figure drawings were made quickly, about 10 minutes per drawing, with blue PanPastels. 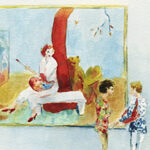 Some sketches from my recent trip to Florida….. The first sketch is from a fascinating exhibit at the Norton Museum of Art: “O’Keeffe, Stettheimer, Torr, Zorach: Women Modernists in New York.” Not that this has to do with Florida exactly, but it was an inspiring experience from my trip.  Shown here is a self-portrait by the wonderful  Florine Stettheimer accompanied by a couple of ladies in […]

Inspiration in your inbox

I'm an artist based in New York City, working in a style that is dreamy, romantic, chic and colorful. Read more…

Inspiration in your inbox ….