From my sketchbook at the Whitney Museum. The museum’s founder, Gertrude Vanderbilt Whitney, as painted by Robert Henri in 1916, “observing” the visitors. This commissioned painting did not please her husband, Henry Payne Whitney, who refused to hang it in their home because she was, scandalously for the time, wearing pants! A professional sculptor, Mrs. Whitney hung the painting in her studio on West 8th Street in Greenwich Village. In 1931 her studio became the first home of the Whitney Museum. 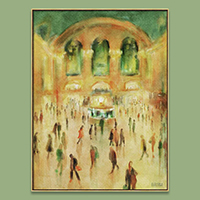 This site uses Akismet to reduce spam. Learn how your comment data is processed.

Be the first to know
about Beverly's latest
art, inspiration
& special promotions.
subscribe